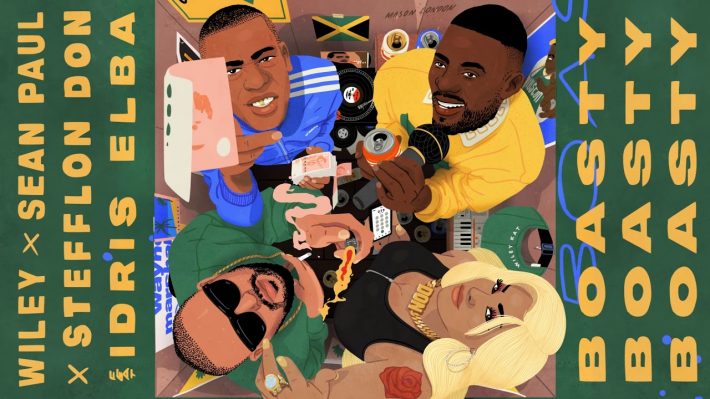 Found a new tune courtesy of my man DJ Dubconcious who always has the scoop on the latest hotness. This track is a remix of a song by Wiley called “Boasty”. Wiley is a pioneer of the grime genre which originated in the UK, and traces its lineage back to jungle and UK garage music (which in turn were derived from reggae/dancehall). The first track I ever heard by Wiley was this one called “Wearing My Rolex” which was notable for this foxy music video:

Also, as I’m writing this review, I feel like I am experiencing some sort of temporal displacement. Back in 2007, I went on a big family trip to the UK with all of my cousins, and there were a series of songs that came out that summer which ended up being the soundtrack for the trip. I could have sworn that this Wiley track was one of them, however upon looking it up just now it looks like it didn’t come out till 2008. The song was a chart topper in the UK, and true to it’s Jamaican roots, there was a Heatwave refix of this track featuring Beenie Man that came out shortly afterwards which was really good:

Following the same formula, Wiley released a track called “Boasty” last year, and then got it blessed by a few other artists. Sean Paul should be no stranger to anyone reading this blog. Stefflon Don is a female artist from the UK who I am not familiar with, so I’m going to have to do some research on her before I can say anything intelligent about her music. The biggest surprise though is the feature from Golden Globe winning actor Idris Elba.

Most people are familiar with Idris Elba’s acting career, but he also has a burgeoning music career as both a DJ and an artist. Adding to that his recent directorial debut at the Sundance Film Festival with an adaptation of Victor Headly’s 1992 novel “Yardie”, makes him a god damn renaissance man as far as I’m concerned. Long rumoured to be the next James Bond-in-waiting, Idris does a decent job with his verse (Sean Paul is a tough act to follow!) and makes sure you know he wrote it himself. No Ghosty!

One other cool thing to note is that the video has some animations which pay an homage to the dancehall. If you look carefully, you will see posters scrolling down the walls with the names of Beenie Man, Wayne Marshall, Vybz Kartel and King Jammy. A subtle, but nice touch. (edit: they removed the animated video and put up a real music video, so the above comments no longer apply!)