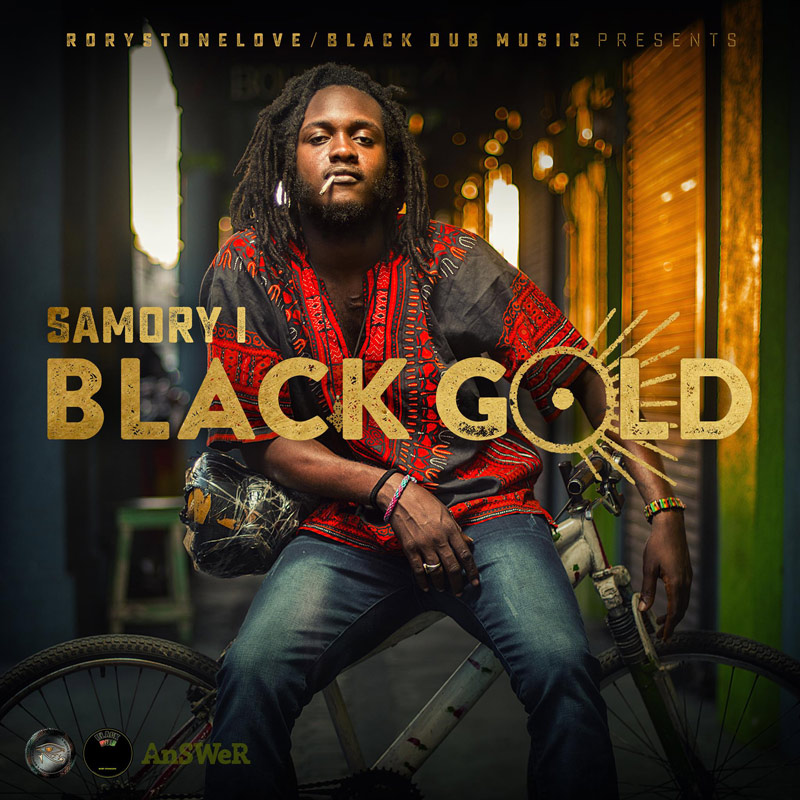 A few months ago, Damian Marley finalized the release date for his new album titled “Stony Hill”. I was super excited for this July release, and as the countdown continued, I was already anticipating having the album on constant repeat. Little did I realize that it would only be my second favorite album to drop that month. Just a week before the arrival of Stony Hill, a relatively new artist named Samory I released an album called “Black Gold”. My first taste of Samory I came from a track called “Rasta Nuh Gangsta” which was a Rodigan scorcher on his BBC 1Xtra show a few months ago.

This is second track on the album, and it’s pretty damn solid. The album version however is an extended version that lasts almost 10 minutes! The track gets an extensive dubwise treatment by producer Rory Stonelove, but you have to buy the album to hear it as I can’t find it available on any free streaming platforms.

The first track on the album is called “Son of David” and it opens with a powerful horn section, which is in my opinion, the best way to start any reggae album 🙂 The title of the song refers to the Rasta belief that they are descendants of King David (the young shepherd in the Bible who would go on to kill Goliath and eventually become king). Like most of the songs on this album, this tune deals with themes of suffering, slavery and spirituality. If you listen carefully, you will also note that the song uses the unmistakable bass line from Bob Marley’s Natural Mystic. It gives the song that familiar feeling, which I would describe as putting on a warm and fuzzy reggae blanket in the dead of winter.

“Not Because” is the third track on the album and the message it conveys is that even though African nations, or countries like Jamaica have achieved “independence”, their black government leaders are no better than their old white slave masters. It’s a scathing criticism of corruption and systematic oppression that has been handed down as a legacy of colonialism.

The fourth track is called “Serve Jah” and it’s one of my favourite songs on the album:

Samory I sings with such devotion, that it’s hard not to be moved by the depth of his faith. While there are many reggae songs that sing the praises of Jah, the best ones are often not separated by the melodies, but the conviction of the singer. And any doubts about the convictions of Samory I after this song can immediately be put to rest. The stirring saxophone solo at the end of the song is another example of the brilliant production by Rory which puts this track over the top.

The fifth track is a more uptempo tune called “Suit & Tie”. I really like this track for it’s catchy hook and the use of an unusual sound I can’t quite make out. I would describe it as a digital xylophone 🙂 It’s invariably a synthesized sound, but the timbre of it immediately reminded me of the one used in the 1972 synth-pop smash hit “Popcorn” by Hot Butter.

I was born in 1978, but I have a vivid memory of that song as it was on an LP collection my dad had which compiled the biggest hits of the 70’s. Come to think of it, it was probably my first ever exposure to synthesized or electronic music of any sort! An interesting factoid I discovered while looking for that song, was that the version by Hot Butter was actually a cover. The original was composed by Gershon Kingsley in 1969, and it’s one of the earliest examples of the synth-pop genre. Hard to believe this song is almost 50 years old, indeed, if the audio fidelity was better, it could easily sound like it had been released this decade.

Anyways, I’m digressing again 🙂 The sixth track on the album may be the heaviest of all. In “Lost Africans”, Samory I sings a lament to his lost African brothers and sisters. He sings not of the lost lives of African slaves, but of Africans here in the west who are lost because they have been stripped of their ancestral identity and culture. Unlike most people who migrated willingly to the west, slaves stolen from Africa had any connection to their native land torn asunder in the process. The song opens with some Nyabinghi drumming, which gives birth to a super heavy bass line that sets the stage beautifully for the lyrics to come.

Next is “There Is A Spirit” which is an uplifting track. Although it’s not one of my favourites, it also ends with a really nice sax solo, so it’s hard to complain.

The title track of the album has become my new favorite song of the moment. I was hypnotized by the bass line and felt like I had been transported to the vaunted Kingston Dub Club in Jamaica. I should clarify that I’ve never actually been there, but the images I have seen of it were going through my mind like a slideshow. Part of the reason these images were evoked was because of the chant the song starts with: “Go up Emmanuel Road, gal and bwoy, go up Emmanuel Road, g’wan go bruck up rock stone”. The imagery of driving up a mountain road became very visceral as the bass pulsed through my 12″ subwoofer. The contrasting, delicate highs of the cymbals coming from my PSB towers had my auditory sense working overtime while trying to take in this vast sonic landscape. Sadly, a lot of this beauty is lost if you are not listening to this music with lossless audio or proper speakers. When I stream this song on my phone and plug in my headphones, the bass loses it’s depth, and the cymbals become muddled to the point that they sound like snare hits. After listening to the song a few times though, it occurred to me that he could not have been talking about the Kingston Dub Club since it’s located on a street called Skyline Drive. The next idea that dawned on me was that maybe he talking about visiting Bob Marley’s birthplace in Nine Mile. I thought the reference to “rock stone” may have come from Bob Marley’s “Talkin’ Blues” where he sang “Cold ground was my bed, and rock stone was my pillow”. When I last visited Jamaica, I made the pilgrimage to Bob’s birthplace, and saw the very same rock stone that he slept on. However, when I searched for Emmanuel Road in relation to Bob’s birthplace, I couldn’t find anything. It turns out I was wrong on both counts, and the chant is actually from an old Jamaica folk song which I’m sure predates the Bob Marley reference. The song is actually taught to young children as a game that is traditionally played with rocks:

Astute reggae fans will also notice the song also has a melody which was sampled in the chorus of this classic dancehall tune by T.O.K. on the Diwali riddim:

In another stroke of production genius by Rory, the end of this track features a seemingly random succession of snare hits. At first, they seem out of place, but as they become more rapid, it begins to sound like gunfire. In Jamaican dancehalls, a “gun salute” is a sign of respect for a big tune, which this one absolutely deserves!

The ninth track on the album is the obligatory ode to the herb. The one thing I like about this track is that it really shows off Samory I’s wide vibrato. His voice is very distinctive, and while some may think he uses his vibrato too liberally, I rather like it as it imbues all his tracks with a unique emotional energy. The two tracks that follow this are “Jah Power” and “Fear of Jah” which as the names imply, sing the praises of His Imperial Majesty, Haile Selassie I. They are also the last original tracks on the album. The penultimate track is a cover of Syl Johnson’s classic “Is It Because I’m Black?”. I think it was a great song choice for a few reasons. First, the original is a blues song which lends itself really well to a slow roots reggae vibe. Second, the emotional energy Samory I brings to the track (in part with the aforementioned vibrato) is intense and fits with the overall theme of the album. Lastly, with the state of the world as it is today, as evidenced by the emergence of the Black Lives Matter movement, it’s a song that is unfortunately just as relevant now as it was almost 50 years ago.

The album ends on a decidedly happier note with the track “Rastaman” which samples a 1989 track from the legendary John Holt called “If I Was A Carpenter”. The John Holt song was actually a cover of Bobby Darin’s song of the same name from 1966, but I much prefer Holt’s version (yes, I’m probably a bit biased, but hey, it’s a reggae blog!).

I wish more of the songs from this album were available to stream on free platforms like SoundCloud or YouTube so people could listen to the songs before committing to buying the album. Part of the reason why I spent so much time on this review was to convince people that they should go buy this album even without getting the chance to listen to it in totality because it really is worth every penny. The title of this album really says it all as it truly is black gold both literally and figuratively.